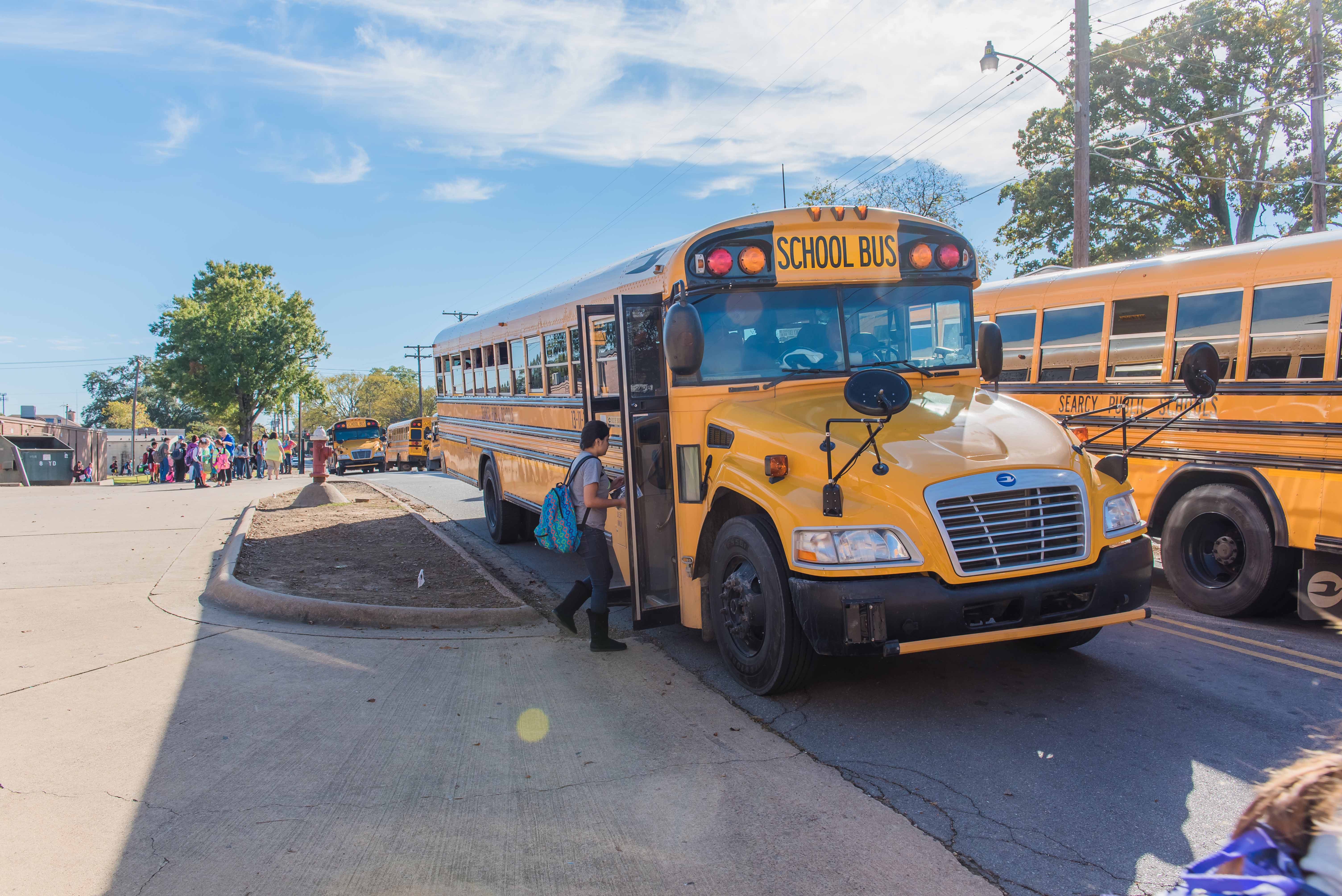 Transportation Telephone Numbers:
Transportation Office - 501-268-6954
For any questions regarding which school district you live in please go to http://www.arcountydata.com/search.asp

The purpose of the Transportation Department of Searcy Public Schools is to provide the safest and most efficient transportation possible for those students who are to be transported between their homes and schools. This process is the responsibility of the entire community and requires the cooperation of all students, parents, school personnel, and citizens who drive on the streets in the presence of school buses.
Eligibility to Ride Bus: To be eligible to ride a bus, students must ride a bus a minimum of two miles from their stop to their school.

Students and parents are asked to read these regulations carefully. They must be followed if we are to provide safe and efficient transportation for the students of this district.

1. Be at the bus stop at the scheduled time. Stand back about ten feet from the bus stop and wait until the door is opened before moving closer to the bus. Do not play on the highway or road. If you miss the bus, do not attempt to hitch a ride or walk to or from school. Discuss with your parents what action you should take if you miss the bus.
2. Try to be on the proper side of the road to wait on the bus. If you should arrive at the stop just as the bus approaches, wait until the bus has come to a complete stop and the driver has signaled for you to cross in front of the bus. (Unless the driver directs you differently.)

1. While loading or unloading, enter or leave the bus in an orderly fashion.
2. Students who cross the road after leaving the bus in the afternoon must go to a point on the shoulder of the road ten feet in front of the bus. Cross the road only after the driver has signaled you to do so.
3. Do not enter or leave the bus by the back door except in case of an emergency or unless directed to do so by the driver.

1. While riding the bus, students are under the supervision of the driver and must obey the driver at all times. Discipline problems will be handled by the building Principal. The Principal or Transportation Director has the authority to temporarily suspend a student from riding the bus.
2. Students are not to distract the attention of their driver or disturb other riders on the bus. Keep your hands to yourself and be reasonably quiet.
3. Band instruments and bags can be carried on the bus only if they do not occupy the space needed for another student to be seated.
4. Do not ask the driver to let you off the bus any place except your regular stop. (Exceptions must have prior written approval from the building Principal.)

Actions Not Permitted on the Bus:

1. Any items that are not permitted at school are not allowed on the bus.
2. Students are not to tamper with any of the safety devices such as door latches, fire extinguishers, etc.
3. Students must keep seated while the bus is in motion and should remain seated when it stops until the driver directs them to exit.
Students are not to put their hands, arms, heads, or bodies out the window. Do not yell at anyone outside the bus.
4. Students are not to deface the bus or any school property. Do not write on the bus or damage the seats, etc. Do not throw paper, food, or other objects on the floor of the bus. Do not eat on the bus. Keep the aisle of bus clear from books, lunches, coats, etc. Do not put feet in the aisles.
5. Act 729 of 1977 of the State Legislature makes it illegal to smoke on school buses. The penalty for violating this law is a fine ranging from $10 to $100. (Students are not to have tobacco products in their
possession.)
6. Act 814 of 1977 makes it unlawful to threaten, curse or use abusive language to a school bus driver in the presence of students in this state. Any person who violates the ACT shall be guilty of a misdemeanor, and upon conviction, shall be punished by a fine of no less that $25 nor more than $100.

Arkansas PTA, in partnership with the Arkansas Department of Education and Ozark Media, announced the launch of a statewide campaign, Bus Safety Rules of the Road.

Many school districts will benefit from this campaign Bus Safety, Rules of the Road. Arkansas PTA recently committed to developing Bus Safety Rules of the Road and to make them available to all schools in the state. Bus Safety Rules of the Road will enable Arkansas PTA and the Arkansas Department of Education to bring awareness to parents and schools of the dangers that exist during loading and unloading of buses.  School Buses keep an estimated 17.3 million cars off of roads that surround schools each morning.“Nearly 100,000 bus drivers reported that 88,025 vehicles passed their buses illegally on a single day,” said National Association of State Directors of Pupil Transportation Services.